The client's principal brief was to extend and reconfigure the poorly laid out rear kitchen and utility spaces to provide a new high-quality kitchen and dedicated dining space; secondarily an improved interface between the internal accommodation and the rear garden was required.

Early correspondence with the Planning Department made it clear that at 6m, the existing original rear projection was too deep to justify a new side infill extension. We had considered this to be the natural solution to the brief so being forced to look at a new rear extension, on the end of what was already a 6m projection from the original building, raised a number of design concerns.

Principally we were concerned that the addition of a rear extension would result in a long and impractical internal thoroughfare through the new kitchen and dining spaces. As such we considered it critical to connect the garden to the house via the side terrace adjacent to the existing original rear projection. Two new glazed doors were introduced, one from the main reception space, and one within the new utility zone directing the flow outside prior to the principal kitchen and dining spaces. The extension itself was designed to project sideways beyond the extent of the existing rear projection; this helped to strengthen the identity of the new volume, but also allowed a new vertical slot window to the rear of the extension allowing a visual connection between the new dining space and the existing family reception space behind. This window, together with a new large format horizontal slot window to the kitchen, also provides a strong visual connection with the side terrace leading to the garden, helping to animate the procession down the side of the property both from within and without.

The interface between the new extension and the garden was the other aspect that needed special attention to help minimise the possibility of the dining space becoming a thoroughfare. The client's original preconception was that the rear extension should have full-width bi-folding doors with a flush threshold, maximising the physical connection between inside and out. Ultimately it was agreed that in order to create a formal dining space, a physical connection with the garden was not actually the principal concern, and that a framed visual connection would be more valuable. As such the cill was raised, and the majority of the glazing to the rear elevation was fixed. A section of the glazing was left opening for ventilation and reduced access.

The extension itself was designed to fit in with the scale and materiality of the existing terrace, with subtle contrast introduced through tonal differences and a simple and contemporary material palette. 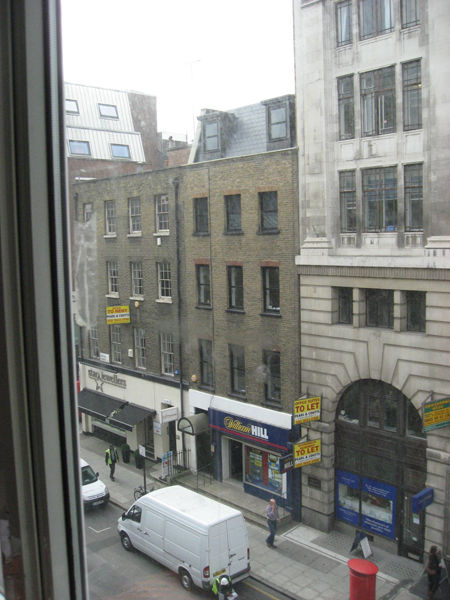